Riding the Bullish Wave in Gold and Silver

Briefly: in our opinion, small (50% of the regular size of the position) speculative long position in gold, silver, and mining stocks are justified from the risk/reward point of view at the moment of publishing this Alert.

In yesterday's analysis, we emphasized that the short-term outlook for the precious metals sector became bullish, and we discussed the silver market in great detail. Both: gold and silver are now higher than they were when we posted yesterday's analysis, which means that taking profits off the table in case of the previous short position was likely a good idea. Since we provided a lot of silver details yesterday, in today's analysis, we'll put greater emphasis on what's happening in the rest of the precious metals sector. In particular, we'll look at the short-term developments in the mining stocks. But first, let's take a look at the very specific chart pattern that we have on the USD Index chart.

Spotlight on the USD Index

In yesterday's Alert, we commented on the USDX in the following way:

Besides, it appears that the USD Index needs a breather as well.

Why? Because it just formed a bearish shooting star candlestick - one of the common reversal patterns. The green and blue dashed lines represent declines that are similar to the October decline. The rallies that followed them were quite sharp, but they too had smaller pauses within them. Both: March-April, and July rallies consolidated after the USDX moved above its 50-day moving average. This happened recently and the reversal shooing star suggests that the time for the corrective downswing is here.

At the same time, it seems that we are seeing a quick shift in the gold-USD dynamics. Gold recently managed to decline regardless of USD's daily show of strength or weakness, but this seems to be changing today. The USDX is up by less than 0.1%, which should theoretically make gold drop at least somewhat. Instead, gold is more than 0.5% higher so far today.

Both: USD's possible short-term decline, and the temporary change in the gold-USD link point to higher gold prices in the near term (perhaps until the end of the month or so).

The bullish implications of the gold-USD link clearly remain intact. Gold moved higher yesterday, even though the USDX ended the session slightly higher. Gold is clearly showing that it wants to move higher in the next few days.

Since the USDX didn't decline after the shooting star reversal, didn't it just show strength? Not necessarily. You see, it didn't soar either. Instead, it continued to trade back and forth in an increasingly tight trading range, thus creating a rising wedge pattern. You can see it more clearly on the below 4-hour chart.

If rising wedge patterns are broken to the downside, they are likely to result in quite sharp declines. This means that while we think the USD Index is going to rally to much higher levels in the following months, it seems that it could move sharply lower in the short run.

The Short-Term in PMs

The most important thing about the above chart is that it shows that miners' strength didn't disappear. Conversely, even though they corrected some of their gains before the session ended, miners have moved much higher than either gold or silver did on a relative basis. By relative, we mean compared to the November decline. Gold and silver were barely up, but miners temporarily erased about half of the decline.

Both metals are higher in today's pre-market trading (above yesterday's highs, meaning that everyone who got aboard with our long position is already profitable) which suggests that mining stocks will rally once again today.

Gold and silver were rather reluctant to rally more profoundly yesterday because they just verified breakdowns below the previous support levels and the latter turned into resistance. And they would have likely managed to get back above these levels - if they received help from the USD Index. But they didn't - at least so far. Given the big number of news releases that we're going to get today and tomorrow, it's quite likely that one - or a combination of them - will serve as a trigger for the moves that technicals predicted beforehand.

Let's take a closer look at the mining stocks. 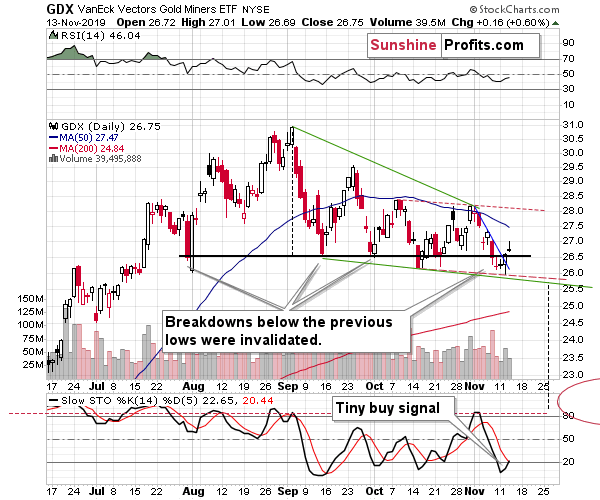 The miners closed above the previous day's close, but it's more important that they closed above the previous lows. This means that they invalidated breakdowns below the late-July, mid-September, late-September, and October lows. The volume was not particularly strong, but that's actually a good thing, because the session took shape of a daily reversal. Strong volume would validate the reversal and relatively low volume invalidates it. In other words, one should focus on the invalidation of breakdowns, not on the shape of yesterday's candlestick. The implications are bullish for the short term.

In yesterday's analysis, we didn't explain why we set our target for the GDX ETF a bit below the $28 level and the above chart shows why. The most recent highs along with most recent lows create a trade channel and its upper border is the first of the strong resistance levels. There's also the 50-day moving average, but it might not be as reliable as many think (please note how miners ignored it in September).

Looking at the GDX to GLD ratio, we see that the ratio could move higher, to about 0.2. This is (approximately) the 50% Fibonacci retracement level that is strengthened by the upper border of the rising trend channel, and the early-October high.

Multiplying $140 by the 0.2 from the ratio provides us with $28 as the target for the GDX - and that's almost exactly the upper border of the trading channel - the resistance that we thought was going to be reached anyway. Both techniques point to the same level - they confirm each other.

Now, the question is why don't we think gold, silver, or miners move even higher. Actually, that might happen, especially if we see more weakness in the USD Index than we expect to see at this time. But the point is that our profit-take levels represent the easy part of the move. Our goal here is not to catch the exact top, but to make some quick profits and get back on the short side of the market, because that's where the biggest money is likely to be made in the following months. What we're doing right now is a trade against the bigger trend (down), which is quite risky - and that is also why our trading position is relatively small.

Naturally, the key bearish factors for the medium term remain intact - the outlook became bullish only for the short term.

Summing up, the outlook for the precious metals sector remains very bearish for the following months, but it seems that we will first see a short-term upswing before the decline continues. Based on what we saw yesterday and what we see so far today, the bullish outlook is even more justified. We expect to close the current long position relatively soon and open another short position at that time - so that we're once again positioned to gain from the main trend, which remains down.

Trading capital (supplementary part of the portfolio; our opinion): Small speculative long position (50% of the full position) in gold, silver, and mining stocks is justified from the risk/reward perspective with the following stop-loss orders and binding exit profit-take price levels: