The Silver Opportunity in Disguise

Briefly: in our opinion, full (250% of the regular size of the position) speculative short position in gold, silver, and mining stocks are justified from the risk/reward perspective at the moment of publishing this Alert.

Silver soared - and silver plunged. The history repeated itself to the letter. Practically each time after silver finally shows strength relative to gold, and silver investors cheer, the rally is invalidated, and a massive decline follows. While we think that silver's investment potential for the long run is enormous and we have special plans for the white metal in our long-term investment strategy, it doesn't prevent us from using the above mechanism as a reliable sell signal. We shorted the silver market on the day of the exact top and just one day later, silver already erased most of its May-June rally. Yesterday's closing price was the lowest in June. There's still huge potential in this trade, but one may be wondering if it's due to the decline's potential continuation, or perhaps based on the rally that might follow such a dramatic daily plunge...

In short, the former is much more likely. The decline seems to have only begun.

Let's take a look at the charts for details.

Silver and the Rest of the Squad

On the above short-term chart, we can see that silver's decline is indeed the most profound one. Gold and mining stocks declined as well, but they haven't moved to even their respective 38.2% Fibonacci retracement levels. There are two good reasons to think that the decline will continue:

Based on the latter analogy, we can expect gold to erase the entire May-June rally - likely this month. Based on the former analogy, we should be expecting gold to move well below the previous 2019 lows in the following weeks.

Let's move back to silver for a moment.

In yesterday's Alert, we wrote the following about the above SLV ETF chart:

Friday's session took a very specific shape. It was a reversal candlestick pattern known as the gravestone doji. There were two cases in the recent past when we saw practically identical move after a very similar preceding rally. It was in the second half of February 2019 and it was almost exactly a year ago - in June 2018. In both cases, shortly after silver reversed in the aforementioned way, it erased the entire preceding rally and then declined much move. The implications here are very bearish.

So far SLV erased "only" most of the rally. But let's keep in mind that it was just one trading day. Give silver a few more days, and it will likely be at new 2019 lows. 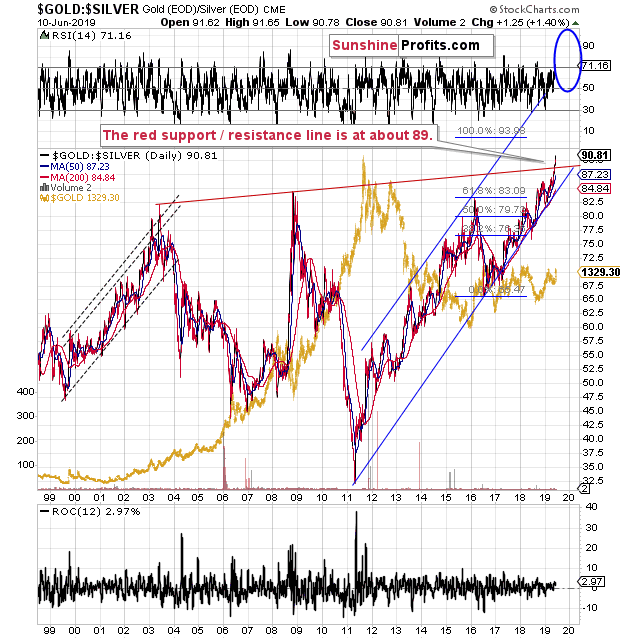 Remember how everyone and their brother told you that the gold to silver ratio moved to the previous highs and that it was topping. Practically nobody noticed that the ratio actually broke above the previous highs and that the real long-term resistance is much higher - at the 100 level. The recent slide in silver is one of the implications. More of them will follow in the next weeks and months. Silver is likely to move below its 2015 low relatively soon (perhaps even in June) and that's when quite a few investors will start to panic.

Many will scream "manipulation", while forgetting that they choose to ignore the breakout in the all-important gold to silver ratio many weeks before and follow gold-and-silver-promoting materials instead of analyses.

On Friday, we wrote the following about the XAU Index:

The very long-term and very strong (based on multiple important tops) declining resistance line is at about 75. The XAU Index just closed at 74.41. While a temporary move above this line is quite possible - after all, it happened earlier this year - a big move above it is very unlikely. Invalidation of the small breakout would be much more likely, and another powerful slide would likely be in the cards.

We didn't have to wait long before the market did just that. We saw a tiny move above the 75 level (Friday's intraday high was 75.54) and then an invalidation thereof. The XAU Index closed the week at 74.33 and it closed at 73.32 yesterday. The decline seems to have just begun.

Before summarizing, let's take a look at the USD Index.

The USD Index Is About Done Bottoming 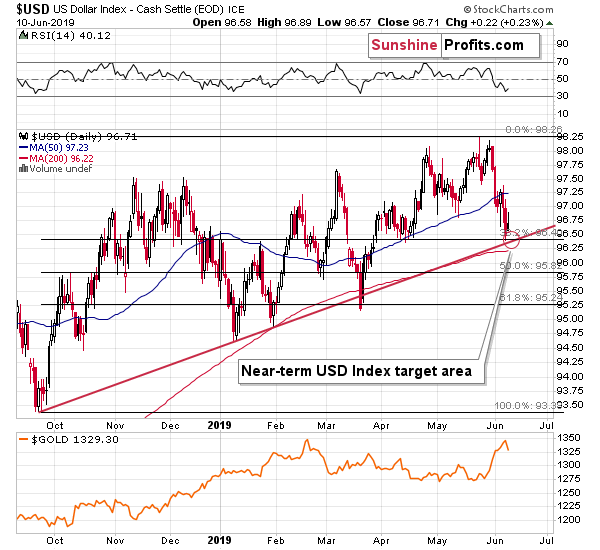 Let's start by quoting what we wrote about the above USD Index chart yesterday:

In Friday's intraday Alert, we wrote that situation on the USD Index chart is much better than it appeared at the first sight. The most bullish situation for a given market is when everything bad that could have happened... Has indeed happened. The USD Index has been bombarded by bearish news in the past 5 trading days, starting last Friday. And yet, the US currency is far from its yearly lows. In fact, it's more or less at its January highs, at its rising short-term support line. The USD index is holding up very well relative to everything that happened recently, and this strength is a bullish sign.

As you can see, the U.S. currency seems to have bottomed in the middle of our target area - at the moment of writing these words it's already up by 0.3 in today's pre-market trading. The implications for the precious metals market are very bearish.

Interestingly, the USD Index gave away some of the early gains and ended the session only 0.22 higher. This makes gold's, and - especially - silver's declines even more bearish, because it means that both metals were able to decline on such little help from the USDX. It's a bearish sign then only a tad of bearish influence results in visible downswings and that's exactly what we have right now in case of the USD-gold-silver link.

Summing up, it seems that we have just seen a major top in the precious metals market. We had a series of factors that were positive for the precious metals market and negative for the USD Index, but it seems that what could have happened based on them, has already happened. Based on the resistance levels that were reached, and relative performance of gold, silver, and mining stocks, we are very likely to see lower prices this week and in the weeks ahead. Gold and silver decline visibly yesterday, and they are down also in today's pre-market trading - it seems that we shorted the market right at the top.

Trading capital (supplementary part of the portfolio; our opinion): Full short position (250% of the full position) in gold, silver, and mining stocks is justified from the risk/reward perspective with the following stop-loss orders and exit profit-take price levels:

On Friday, it was announced that the U.S. added merely 75,000 jobs in May. Needless to say, a severe disappointment on the downside. The talk of an oncoming recession, and the interest rate cut speculations - were boosted. Is it justified? How close are we actually to the end of the business cycle? Should we buy gold now?

May Payrolls Disappoint. Fed to the Rescue? And Gold?