Silver and mining stocks jumped on intraday highs only to pull back at day’s close. In other words, they moved nowhere – another sign of a market top.

The price moves we’ve seen so far this week are particularly interesting. And I don’t mean the boring action in the GDX (which serves its own purpose as a signal), but the reversals in gold and silver. What Can History Teach Us?

In the case of gold, the reversal took gold – temporarily – to new highs, but then gold declined once again. At the moment of writing these words (Jun. 2), gold is trading back below $1,900.

This price action took place on relatively significant volume (not as significant as the price action in silver, though), which suggests that the reversal is important. Moreover, that’s only a confirmation, as we knew that the reversal was important all along – based on the triangle-vertex-based reversal we recently saw. Combination of this with highly overbought RSI, a sell signal from the stochastic indicator, and, most importantly, the analogies to how the situation in gold developed in 2008 and 2012, provides us with an extremely bearish outlook for gold.

Many other factors are pointing to these similarities, and two of them are the size of the correction relative to the preceding decline and to the previous rally. In 2012 and 2008, gold corrected to approximately the 61.8% Fibonacci retracement level. Gold was very close to this level this year, and since the history tends to rhyme more than it tends to repeat itself to the letter, it seems that the top might already be in.

In both years, 2008 and 2012, there were three tops. Furthermore, the rallies that took gold to the second and third top were similar. In 2008, the rally preceding the third top was bigger than the rally preceding the second top. In 2012, they were more or less equal. I marked those rallies with blue lines in the above chart – the current situation is very much in between the above-mentioned situations. Also, the current rally is bigger than the one that ended in early January 2021 but not significantly so.

Since I realize that it’s most difficult to stay on track right at the top, let me remind you about two key facts:

Back in 2008, gold corrected to 61.8% Fibonacci retracement, but it stopped rallying approximately when the USD Index started to rally, and the general stock market accelerated its decline.

Taking into consideration that the general stock market has probably just topped, and the USD Index is about to rally, then gold is likely to slide for the final time in the following weeks/months. Both above-mentioned markets support this bearish scenario and so do the self-similar patterns in terms of gold price itself.

What would change my mind with regard to gold itself? Perhaps if it broke above its January 2021 highs and confirmed this breakout. This would be an important technical indication on its own, but it would also be something very different from what happened in 2008 and 2012. If that happened along with strength in mining stocks, it would be very bullish. Still, if the above happened, and miners didn’t react at all or they declined, it would not be bullish despite the gains in the gold price itself.

The March 2021 low formed well below the previous low, but as far as other things are concerned, the current situation is similar to what happened in 2012.

The relatively broad bottom with higher lows is what preceded both final short-term rallies – the current one, and the 2012 one. Their shape as well as the shape of the decline that preceded these broad bottoms is very similar. In both cases, the preceding decline had some back-and-forth trading in its middle, and the final rally picked up pace after breaking above the initial short-term high.

Interestingly, the 2012 rally ended on huge volume, which is exactly what we saw also on May 19 this year. Consequently, forecasting much higher gold prices here doesn’t seem to be justified based on the historical analogies.

The thing I would like to emphasize here is that gold didn’t form the final top at the huge-volume reversal on Sep. 13, 2012. It moved back and forth for a while and moved a bit above that high-volume top, and only then the final top took place (in early October 2012).

The same happened in September and in October 2008. Gold reversed on huge volume in mid-September, and it was approximately the end of the rally. The final top, however, formed after some back-and-forth trading and a move slightly above the previous high.

Consequently, the fact that gold moved a bit above its own high-volume reversal (May 19, 2021) is not an invalidation of the analogy, but rather its continuation.

There’s one more thing I would like to add, and it’s that back in 2012, gold corrected to approximately the 61.8% Fibonacci retracement level – furthermore, the same happened in 2008 as you can see in the below chart. Consequently, the fact that gold moved above its 50% Fibonacci retracement doesn’t break the analogy either. And even if gold moves to $1,940 or so, it will not break it. It’s not likely that it is going to move that high, as in both cases –in 2008 and 2012 – gold moved only somewhat above its high-volume reversal before forming the final top. So, as this year’s huge-volume reversal took place close to the 50% retracement and not the 61.8% retracement, it seems that we’ll likely see a temporary move above it, which will create the final top. And that’s exactly what we see happening so far.

Also, please note that while it might seem bullish that gold managed to rally above its declining black resistance line recently (the one based on the 2020 top and the 2021 top), please note that the same happened in 2012 – I marked the analogous line with red. The breakout didn’t prevent gold from sliding. When the price reached the line, we saw a short-term bounce, but nothing more than that – the gold price fell through it in the following weeks.

Having said that, let’s check what silver and mining stocks did. 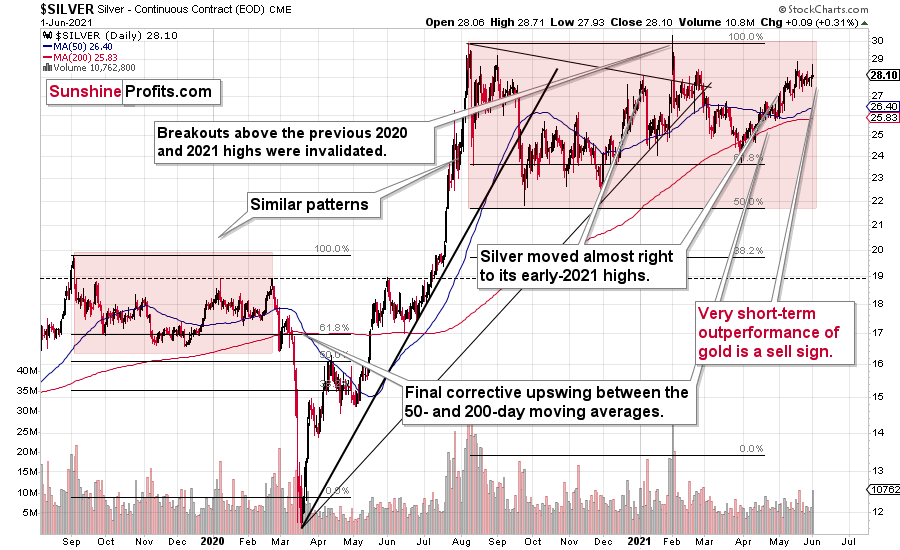 Silver has barely moved in terms of the closing prices. However, it has rallied significantly on an intraday basis – more than gold did; and the volume on which it happened was more notable than the one in gold.

In other words, silver did exactly what it tends to do at market tops. And we can say the same thing about the mining stocks.

Gold miners moved higher, but the move took place on relatively low volume, so it was nothing to write home about. Miners refused to follow gold higher, but they seem likely to follow it lower as soon as they get a good trigger for it (a decline in gold). Actually, gold stocks can decline even without a decline in gold, at least initially – that’s how the 2012-2013 decline started, after all.

The clearest of the recent signs coming from mining stocks is the fact that gold rallied by almost $30 last week, and the HUI Index (flagship proxy for gold stocks) went down slightly. This is extremely bearish.

Meanwhile, the USD Index has just confirmed its short-term breakout, suggesting that the analogy to 2016 and the similarity to how it bottomed (triple bottom with lower lows) in mid-2020 remains intact. And so does the bullish outlook for the universally-hated-and-massively-shorted U.S. currency.