Where Next After the Daily S&P 500 Consolidation?

With yesterday's hefty gains taken off the table, and a new profitable position that has them secured already, will the S&P 500 let me add to the tally some more still today? Given yesterday's Powell-testimony-induced wild swings and preceding strong retail sales data, it's not unimaginable that we're in for another enjoyable ride today as well.

Yes, I think that the grind higher in stocks remains on, slow or not so slow. 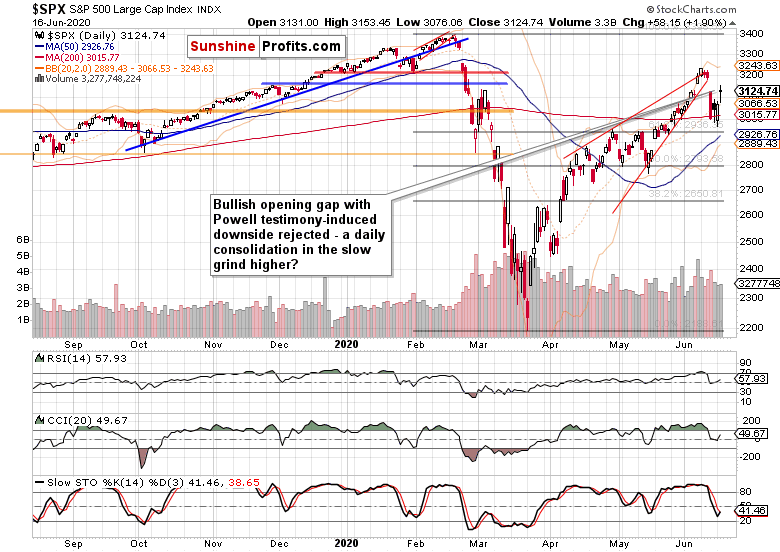 As I looked for them to do, the stock bulls reasserted themselves, and the open long position profits kept growing post the Fed individual corporate bonds buying announcement, and I walked off with an almost 140-point realized profit as Powell didn't catapult stocks immediately higher. Worry not, my other open trade has been unfolding favorably as well, having ended with a 24-point gain!

But what about the daily chart?

The speed with which prices cleared the 61.8% Fibonacci retracement, is lending credibility to the bull market thesis. It's not unexpected that a sharp plunge of Thursday's caliber gives way to a brief consolidation that attempts to move the market either way, eventually followed by similarly sharp rebound. That's a fitting description of what we have seen on Monday and yesterday.

Such were my yesterday's observations:

(...) Reflecting upon the rebound's veracity, the still bearishly looking daily indicators are likely to turn much more positive for the bulls quite soon. Yesterday's volume also gives no reason to doubt the reversal, showing that buy-the-dip mentality won the day.

Should this paradigm hold, then the price consequences of the bearish wedge breakout invalidation and of the island top reversal, would be over pretty soon. I wouldn't be too afraid of stocks approaching the lower border of Thursday's bearish gap, or even of prices moving back near the declining support line connecting the March and May lows.

I consider these technical features as short- to medium-term challenges to the stock bull market, that the bulls would overcome. In other words, I treat the bull market as intact, and merely undergoing a healthy correction that wouldn't result in much technical damage.

They remain valid also today - and with the improving posture of the daily indicators, even more so. Yesterday's volume is certainly consistent with the daily consolidation hypothesis, meaning that stocks can continue higher.

High yield corporate bonds (HYG ETF) gapped strongly, but gave up much of their opening gains as the Powell testimony kicked in. I would read the daily setback suffered as just that - a daily setback, and not a reversal. The volume doesn't point to corporate bonds moving lower, and their uptrend remains entrenched.

The HYG:SHY ratio with overlaid S&P 500 (black line) shows that stocks aren't getting ahead of themselves. Now that we have checked the closeness of their mutual relationship, the key question is of course the short-term path of both the ratio (with the HYG ETF being its arguably key determinant) and stock themselves.

In my opinion, that remains overall higher despite the many clouds on the horizon. After all, that's what bull markets do - they climb a wall of worry.

Technology (XLK ETF) isn't too far from its early June highs, with semiconductors (XSD ETF) keeping pace. Healthcare (XLV ETF) has some more work left to do on the upside, which is similar to the financials (XLF ETF).

The performance of the stealth bull market trio of energy (XLE ETF), materials (XLB ETF) and industrials (XLI ETF) hasn't been spectacular yesterday, but remains consistent with the unfolding upswing.

The many sectors are working to repair Thursday's damage, and technology with semiconductors is leading to the upside - it's as simple as that.

The stock bull market is still young, and far from a top.

Summing up, risk-on sentiment ruled yesterday's premarket session, and eventually recovered from the Powell testimony coinciding with downside volatility. The credit market analysis shows that the upswing isn't getting ahead of itself, and remains likely to continue. Treasury yields have slowly risen again, contributing to the recovery narrative and flight to stocks. Smallcaps (IWM ETF) are on board, leading the S&P 500 higher. This is just as good for the 500-strong index advance as its market breadth or technology's (and semiconductor's) leadership is.