According to Reuters, the Indian rupee staged a sharp recovery on Wednesday after suspected heavy dollar selling by the central bank, preventing the battered currency from slipping to a record low on the same day that the authority ushered in a new governor.

Raghuram Rajan, a former chief economist at the International Monetary Fund (IMF), took charge at the Reserve Bank of India as the country faces its worst economic crunch since a balance of payments crisis two decades ago.

The country is grappling with a record current account deficit and a hefty budget deficit, factors both weighing on the rupee. Concerns about rising prices for oil and gold, India's two biggest import items, are keeping pressure on the currency.

What impact have these circumstances had on the gold's chart? Where are the nearest support zones and resistance levels? Let's take a closer look at the daily chart and find out what the current outlook for gold priced in rupees is.

On the above chart we see that the situation has deteriorated since my previous essay was published.

Last week, gold priced in rupees broke above the November 2012 top and reached its new all-time-high at Rs 97,870. In spite of this increase, the breakout was invalidated in the following days and the first corrective move took the price of gold to slightly above the 23.6% Fibonacci retracement level based on the entire June-August rally.

This support level encouraged buyers to act, but they didn’t manage to push the price above the August top. This week, the weakness triggered another corrective move, which pushed the yellow metal below Rs 90,000 per ounce. In this way gold dropped below the 38.2% Fibonacci retracement level based on the upward move from the August low to the August top. Additionally, today the price of gold also slipped below the 15-day moving average, which serves as resistance now.

When we factor in the Fibonacci price projections, we see that the recent corrective move is a bit larger than the previous one. This means that it can extend in the following days. In this case, the 1.272 ratio is around Rs 88,382, and the next one (the 1.414 ratio) is close to Rs 87,497. It’s worth noting that this ratio is slightly below the 38.2% Fibonacci retracement level, and together they form a strong support zone which, from today’s point of view, seems to be the first price target for the sellers.

Once we know the current situation in gold priced in rupees, let’s take a look at the INR/USD chart and find out whether the relationship between gold and the INR/USD values still exist or not. 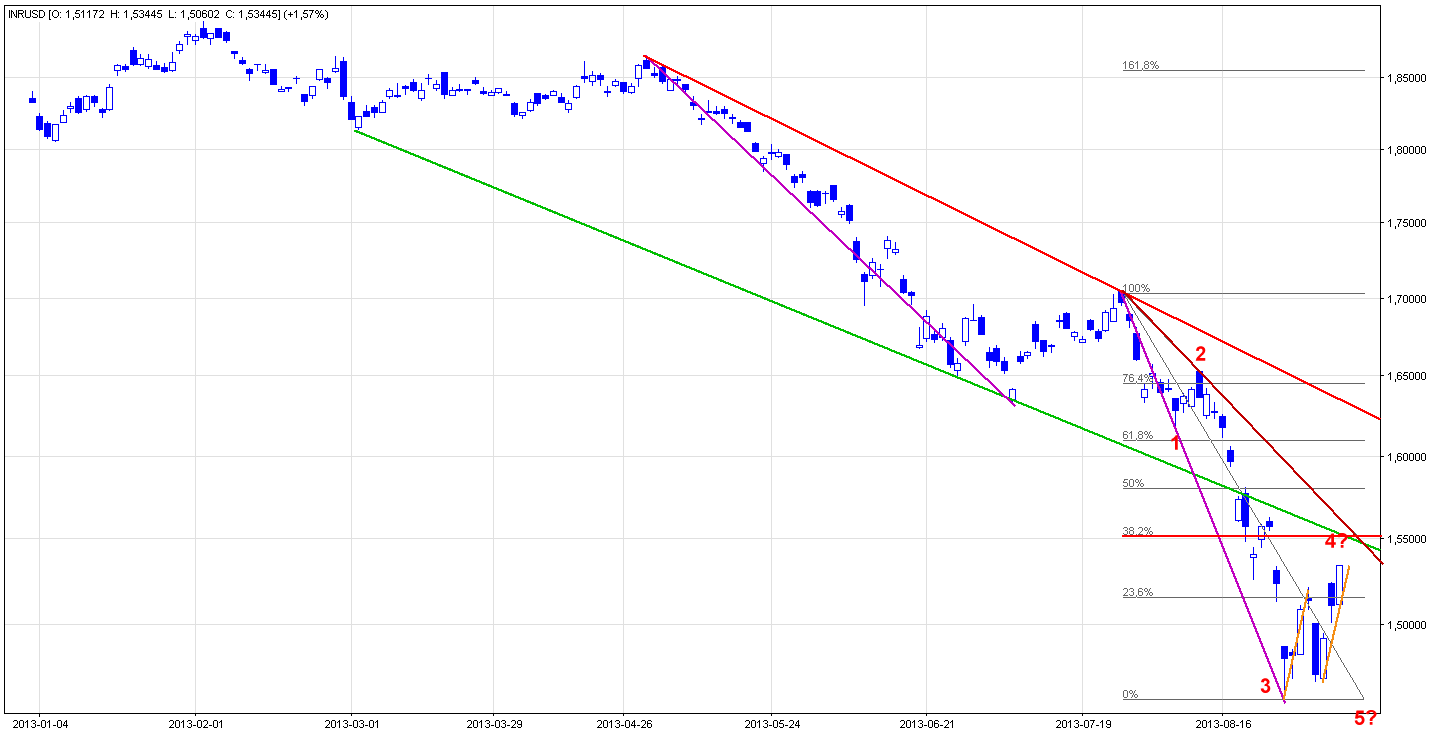 Quoting my essay on gold price in India on August 19:

For the first time gold responded to the INR/USD lower values at the end of July.(…) the rupee is approaching the green support line based on the March bottom and the June low. It is quite possible that this line will stop the decline (…)which may slow further growth in gold. However, if it is broken, the rupee may drop further against the dollar. If it happens and the previously-mentioned relationship remains in place, gold priced in rupees will likely reach its new local high.

As you see on the above chart, the rupee dropped below this support line on August 20. This negative circumstance encouraged gold bears to go short and trigger another downward move which took the rupee below the 150 level. On August 28, the Indian rupee reached its all-time-low slightly above the 145 level.

What happened with gold at the same time? Yes, you’re right, the yellow metal reached its new record high. Taking the above into account, we can conclude that the previously mentioned relationship still exists and it has a great impact on the price of gold.

Keeping this in mind, you are probably asking one question: what’s next?

On the above chart we clearly see that the recent pullback has been quite small and the rupee is still below a very important resistance zone. As you see on the daily chart, the previously-broken green long-term declining support/resistance line intersects with the 38.2% Fibonacci retracement level based on the entire July-August decline. Additionally, slightly above this area, there is also the declining resistance line based on the July and August 12 tops. Taking these facts into account, this strong resistance zone will likely stop the rupee’s rebound. If this happens, we may see further declines in the rupee against the dollar. This point of view corresponds with the Elliott wave principle. As you see on the above chart, the recent pullback might be the last corrective wave before the final bottom. If this scenario works, we may see a pullback in gold in the near term.

Summing up, the recent weakness in the rupee against the dollar resulted in a rally which took gold to a new all-time-high. If the Indian currency reaches the strong resistance zone based on the previously-broken green long-term declining support/resistance and the 38.2% Fibonacci retracement level (based on the entire July-August decline), it is possible that further growth will be stopped. If this happens, the rupee will likely once again drop against the dollar. In this case, if the previously-mentioned relationship between gold and the rupee remains in place, the yellow metal priced in rupees will likely reach its new local high.

On the other hand, if the INR/USD climbs above the 161 level, the Elliott wave pattern will be negated and we will likely see further growth to at least 165.