Based on the April 5th, 2013 Premium Update. Visit our archives for more gold & silver articles.

It seems that collective memory is becoming shorter and shorter. We just celebrated two important holidays in the Judeo-Christian traditions that commemorate events that took place thousands of years ago. Yet, now, in the age of Internet, people seem to forget major events after weeks, or even days. Given this weeks’ performance in the precious metals, people have forgotten that only two weeks ago Cyprus was on the brink of unraveling not only the European union, but the sacrosanct foundations of fractional banking, with the crisis highlighting the fundamental fault lines of both.

On Wednesday silver for immediate delivery slid as much as 1.3 percent to $26.9175 an ounce, the lowest since July 25. Gold is now trading below the pre-Cyprus crisis level and is challenging the two-month low.

There is a difference between a bear market and a correction, which is a short-term trend with a shelf life of less than two months. In a bear market, widespread pessimism becomes self-sustaining. Many consider a downturn of 20% or more over at least a two-month period to be an entry into a bear territory. We disagree with this definition in case of precious metals. The secular bull market remains in place as long as fundamentals remain in place – and that is clearly the case with silver.

According a Credit Suisse Group AG report Wednesday, global government stimulus has cut the likelihood of further banking and liquidity crises and reduced the need for a protection of wealth. The bank cut its 2013 gold forecast by 9.2 percent to $1,580 and lowered its silver estimate by 11 percent to $28.50.

We can only guess that the folks at Credit Suisse have forgotten as well. It was only last Thursday that Cyprus cautiously opened the doors of its banks but tightly rationed withdrawals. People could only withdraw 300 euros of their own money, couldn’t freely cash checks or use their bank to pay suppliers who use other banks. In a few short weeks Cyprus lost its status as an off shore banking center with a banking sector 7 times larger than the annual GDP.

The restrictions are meant to keep Cypriots from emptying their accounts in the wake of the bailout deal announced last Monday that would drastically prune Cyprus’s oversized banking sector, bloated by deposits from Russia and other former Soviet Union countries. Although the deal scrapped the highly controversial idea of a tax on bank deposits, it would still require forced losses for depositors and bondholders, with the amount to be yet determined. The ink has not even dried on the Cyprus story. We have gotten the message loud and clear that gold and silver are the ultimate monetary assets. Now we need to wait for everyone else to get it without losing our shirts in the process.

We have gotten the message loud and clear so let’s have a look at the yellow metal’s technical picture – we’ll start with its the very long-term chart (charts courtesy by http://stockcharts.com.)

We saw a significant price decline this week.

Even though the situation is still bullish, as gold is above its long-term support lines, it seems that it could be the case that the next long-term turning point in gold may be a major bottom as opposed to a top.

At the same time, although prepared and looking to the downside target level, it does not mean that the situation is bearish for the medium term. RSI levels are still oversold, so gold may not decline significantly.

As we discussed in Thursday’s Market Alert sent to our subscribers:

Gold could actually decline to $1,350 or $1,100 and still remain in a secular bull market (in mid-70's this gold retraced almost 50% of its earlier high). Don't panic - this is not a likely outcome. The consolidation is already almost 2-years long (2-years long in case of silver), investors are already very discouraged and the fundamental situation (QEs among other things) is in our opinion more favorable than it was in the 70s.

Let us now see how the situation looks like from the non-USD perspective – we’ll use a GOLD:UDN ratio as a proxy here.

Here we see mixed short-term signals this week. The breakout above the declining resistance line has been invalidated, but the declining support line has held. Even if broken, another is just a bit lower. The situation is mixed for the short term but the medium-term outlook remains positive.

Let’s have a look at the yellow metal priced in Japanese Yen now, as some important bullish events took place on this market.

We see there was a sharp decline on Wednesday followed by a quick pullback on Thursday when the Bank of Japan announced a huge round of quantitative easing. This is indeed a very significant move and a very positive long-term factor for gold. Gold reacted immediately and in terms of the yen remains quite bullish.

Finally, let us turn to gold priced in Australian dollar. 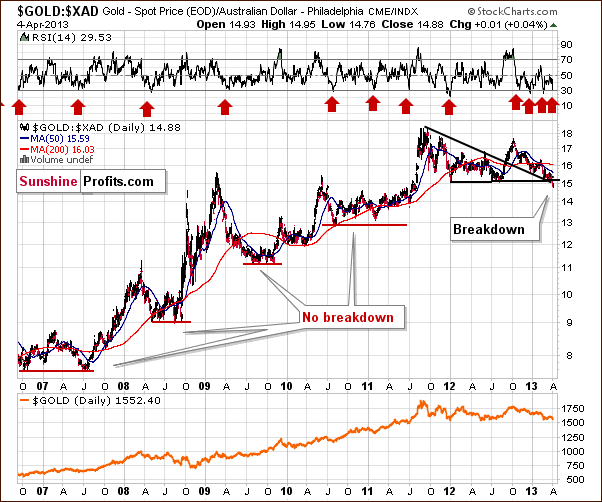 This is our most concerning chart today. Periods of consolidation over the past six years have not resulted in gold’s price moving below the previous low until now.

Summing up, if we see a repeat of this week’s price declines, we will likely need to consider hedging long-term positions in gold. So far, no breakdown has been seen except for gold priced in Australian dollars and at the same time we have a breakout in case of gold priced in the Japanese yen. The medium and long-term outlooks remain bullish.

What to monitor in order to determine if gold, silver and mining stocks are going to plunge? The mining stocks have already broken below their key support levels - how low can they go? How low will likely gold and silver move if they break below their previous lows? Answers to these questions should greatly help you position yourself in this market and determine if you should really be concerned with the current daily price swings (hint: you most likely should). We encourage you to join our subscribers, read today's Premium Update that deals with the above questions and stay informed via daily Market Alerts.