Based on the March 22nd, 2013 Premium Update. Visit our archives for more silver and gold articles.

We have been writing about a bullish outlook for gold, silver and precious metals mining stocks for quite some time now, even though the seemingly bad situation in these markets. This opinion is based on a sound rationale (excellent fundamental situation for precious metals and extremely negative investors’ sentiment often seen at important turnarounds, among others) but we understand that it is still hard to be bullish, looking at the charts that have been full of moves down for the last couple of weeks. We have received an interesting question from one of our subscribers that shows one misconception (in our opinion) about what is needed for a rally in the yellow metal that we would like to comment on:

Q: Hello, "The fundamentals, such as open-ended QE, have been factored into prices. So ‘higher gold’ needs a new story. Investors are no longer excited about the QE story. If there is no other bullish story (how can a story be more bullish than open-ended QE?), the price of gold price will likely go lower." Could you please comment on this? Thanks! Regards.

The fundamentals, such as open-ended QE, have been factored into prices.

Yes, we can agree with that. The information has been around for a while, people are aware of that.

Here we disagree. If a story as bullish as open-ended QE doesn't make gold go higher, then what story could? Maybe it's not a new story that is necessary?

Investors are no longer excited about the QE story

Exactly. Investors are no longer excited (!) and that's the whole point. Open-ended QE and other fundamental factors are positive. All that is missing is this "excitement." This is another way of saying that the situation looks good but people just don't want to buy because they are afraid of losing money. Is the fear really rational? If we agree that the fundamentals are positive, then it's not rational - it's purely emotional and caused by extensive consolidation.

If there is no other bullish story (how can a story be more bullish than open-ended QE?), the price of gold will likely go lower.

When the sentiment becomes extreme enough (extremely negative that is), we will see a turnaround even without an additional story. The fundamentals are already great. Now, a great story (Cyprus-led bank run?) could trigger the rally faster, but it's not required for the gold market to move higher in our view.

Gold’s rally is finally visible here, and the RSI levels (based on weekly closing prices) reflect this as well. This indicator is back above the horizontal red line after staying below it for several weeks. This same action was seen back in 2008 and was quickly followed by a significant rally in gold prices. Back then, after the final bottom formed, gold moved to its previous high shortly.

Last week we wrote about a small breakout in gold viewed from the euro perspective – let’s have a look at this chart to see how the situation progressed.

We saw a break above the declining resistance line early last week. The breakout has been confirmed in terms of range and time. Prices moved high enough to be visible in the long-term perspective and stayed above this line for three consecutive trading days. The situation here is very bullish.

Let us now move on to the chart that shows us the yellow metal’s performance from the general non-USD perspective (the average of gold priced in major currencies), as a similar situation to the above chart seems to have developed there. In short, the following chart represents and average of gold price from the previous chart and other non-USD ones. 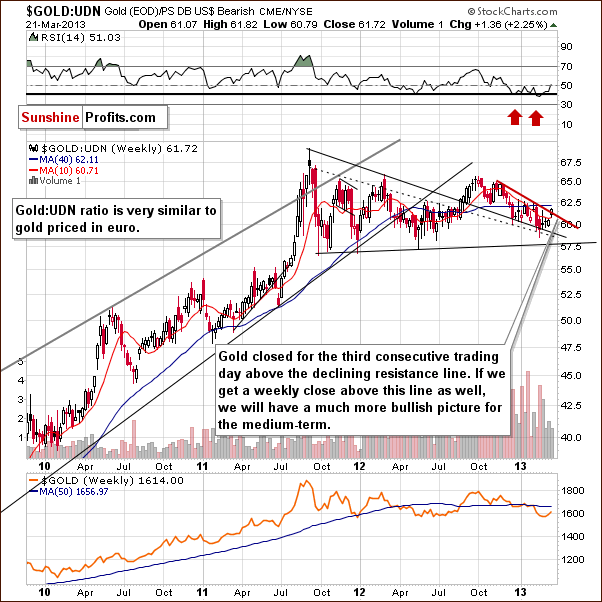 Here we see what amounts to a small breakout so far. Prices are close to but slightly above the declining resistance line and have been there for three consecutive trading days. However, since this is a long-term chart, we prefer to see at least one weekly close above this line to say that the breakout is confirmed. In any case, the outlook has improved this week from a non-USD perspective. Actually, gold closed last week right at this line, but moved above it on Monday as gold didn’t do much from the USD perspective, but the USD Index rallied.

Summing up, gold recently broke above important resistance lines so when viewed from the euro perspective or when non-USD averages are taken into account, an already bullish situation has improved even further. Overall, the outlook remains bullish for gold and – as we’ve mentioned at the beginning of this essay – we don’t think that any breaking-news story is really needed to spark off the long-awaited rally in the yellow metal as the situation is already extreme. It could, however, cause the rally to start sooner.

PS. We have decided to keep our Subscribers updated via daily (!) Market Alerts at least until the end of April - even though the Cyprus deal seems to have been resolved, it will likely make the situation particularly interesting for gold & silver investors (and we already see specific price patterns on the gold market), so daily alerts might be very useful. Secure your access here.