Is Bitcoin the New Gold?

In the aftermath of the U.S. presidential election, gold plunged, while Bitcoin rallied, exceeding $1,000 in the first days of the new year. What does it mean for the precious metals market?

For many months in 2014-2016, gold and Bitcoin moved in tandem. It makes sense, as both assets are alternative means of exchange. However, in the second half of 2016 the cryptocurrency outperformed gold, especially after the U.S. presidential election, as the chart below shows. The price of gold plunged about 14 percent from September to December 2016, while the price of Bitcoin surged about two thirds in that period. In consequence, the gold-to-bitcoin ratio, which measures how many bitcoins can be purchased by one ounce of gold, declined from about 2 in September to almost parity in December 2016, as one can see in the chart below. For these reasons, some analysts argue that the two currencies are approaching parity and we are experiencing a shift away from gold to Bitcoin as the major alternative investment.

Chart 2: The gold-to-bitcoin ratio derived from monthly average prices from January 2014 to December 2016. 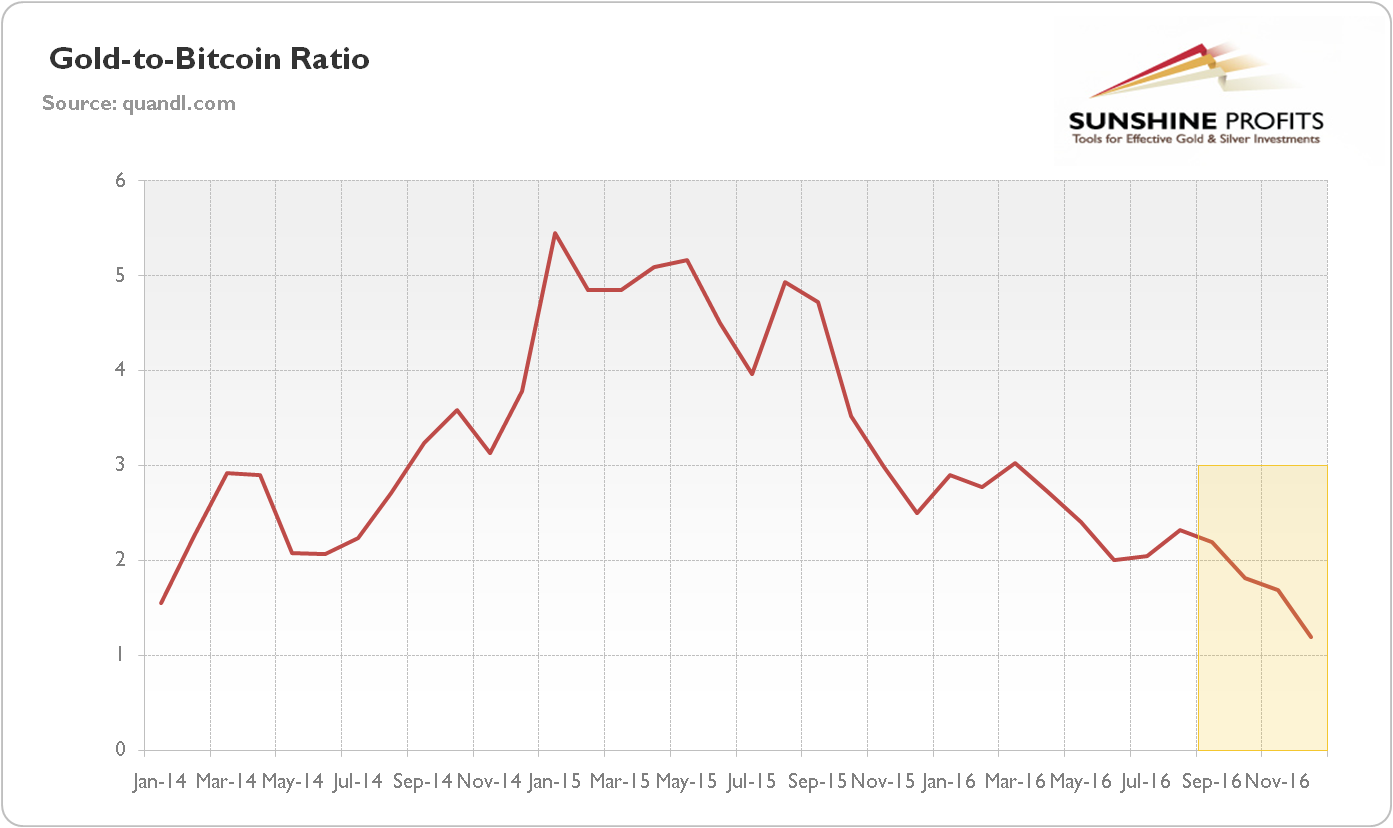 The divergence is very interesting, but it may be too early to announce that Bitcoin replaced gold as a safe haven. It is good to remember that Bitcoin is subject to drastic price fluctuations, much wider than these occurring in the gold market. However, the problem is that some of the investors who would like to buy gold cannot do it due to government restrictions. Indeed, the Chinese government has recently restricted the importation of gold. Hence, some of the Chinese investors could turn to Bitcoin as a way to protect their wealth.

The bottom line is that gold struggled in the second half of 2016, while Bitcoin skyrocketed. It may signal some important changes in alternative investments, but the divergence is rather caused by the restriction on importation of gold. It suggests that gold is still a valuable asset, especially from the long-term perspective, and investors shift to Bitcoin only if they cannot buy as much gold as they would like.

If you enjoyed the above analysis, we invite you to check out our other services. We focus on fundamental analysis in our monthly Market Overview reports and we provide daily Gold & Silver Trading Alerts with clear buy and sell signals. If you’re not ready to subscribe yet and are not on our mailing list yet, we urge you to join our gold newsletter today. It’s free and if you don’t like it, you can easily unsubscribe.