A new global power. The world’s most populous democracy. One of the youngest and fastest-growing countries in the world, with the third largest GDP measured by purchasing power parity. The world’s largest producers of movies and the major exporter of IT services. India. What are its links with the gold market?

The official Indian holdings are 560.3 tons (as of June 2018), the tenth largest in the world (excluding the IMF’s stockpile). Percentage - wise, gold accounts for 5.5 percent of India’s foreign reserves, more than twice as much as China holds. However, the total holdings of gold are much higher, as India has had a long-standing love affair with gold. Tradition requires women to have gold jewelry – when we add all that gold, the number will be significantly higher.

In 2015 India consumed 947 tons of gold. Gold consumption in 2018 will likely be between 700 and 800 tons. Although India is one of the largest gold consumers, it does produce little of the yellow metal. In 2015, the country mined less than 1.5 tons. Hence, India imports a lot of bullion. Gold is actually the second biggest component of India’s import (which accounts, on average, for 8 percent of total imports). In 2015, the country was the third top importer of gold, with imports worth $35 billion.

Gold is deeply rooted in Indian culture. Gold purchases are driven by tradition, festivals and important family and societal occasions, such as weddings. According to the World Gold Council, between 40 and 50 percent of gold purchases in India are for marriages. Gold is seen as a symbol of wealth. It is also used as the primary vehicle for household savings, which should not be surprising given the scale of rupee’s depreciation (since 1970, the Indian currency has lost almost 89 percent of its purchasing power compared to the U.S. dollar). But gold – as an inflation hedge – helped Indians to maintain their purchasing power. As one can see in the chart below, gold prices soared 19-fold! 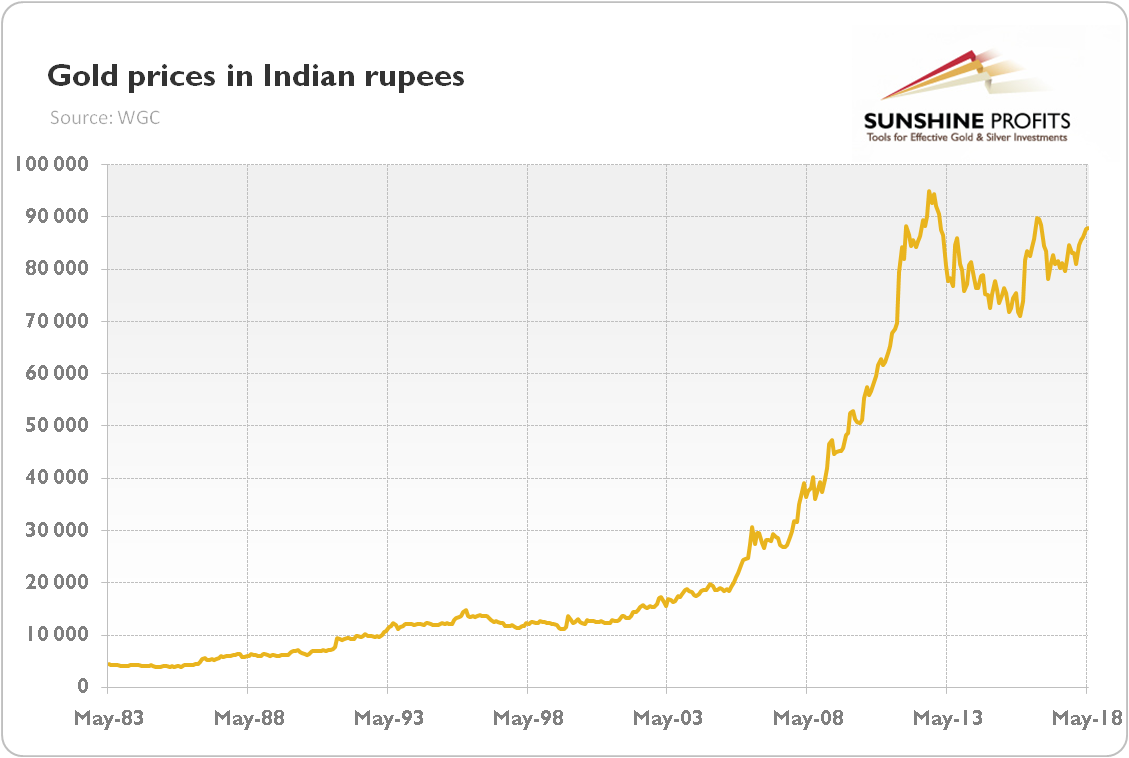 Although India is the one of the largest consumers of gold in the world, with gold deeply rooted in its history, it does not mean that India is a key player in the gold market. Why? Well, the annual India’s gold demand and supply reported by the WGC are only a tiny fraction of gold that is traded in London and New York, the largest market places for gold where the price of gold is formed. So, although the share of Indian investors operating on these markets is unknown, we believe that Western investors and Western institutions remain the key players in the gold market.

India is one of the fastest growing economies in the world. As a rising economic powerhouse and nuclear-armed state, India has emerged as an important regional power, which competes with China. However, its importance to the world economy and capital market is still limited. This is why gold prices seldom react to the developments in India. The key takeaway is that although India, similarly to China, is an important player in the physical gold market, its impact on the gold prices discovery process remains limited. Gold is more sensitive to the American developments, such as fluctuations in the U.S. dollar’s value or in the level of real interest rates.

We encourage you to learn more about the gold market – not only about the link between India and the yellow metal, but also how to successfully use gold as an investment and how to profitably trade it. Great way to start is to sign up for our Gold & Silver Trading Alerts. If you’re not ready to subscribe yet and are not on our gold mailing list yet, we urge you to sign up. It’s free and if you don’t like it, you can easily unsubscribe. Sign me up!