What was the easiest way to make a small fortune during the Great Recession? Start off with a large one.

The Great Recession is the period of global economic decline during the late 2000s. It was initially related to financial crisis of 2007-2008, but quickly transformed into a downturn in real activity and later into the European sovereign debt crisis. According to the National Bureau of Economic Research, which officially declares the peaks and troughs, the recession in the U.S. began in December 2007 and ended in June 2009, but in other countries the scale and timing of the recession varied. It was the largest economic downturn since the Great Depression.

The performance of the US real GDP quarterly growth rate is shown on the chart below. There were multiple causes of this crisis. First of all, after the dot-com bubble burst, the Fed maintained excessively low interest rates for too long, fueling the housing bubble. Moreover, the government conducted policies intended to promote home ownership, even by people who were not able to afford it. The excessive risk-taking with toxic mortgages and derivatives, and record household debt (partially resulting from too low interest rates) also contributed to the economic imbalances and financial instability.

The Great Recession led to a rise in the unemployment rate, an increase in bankruptcies and a rise in government debt, especially in Europe where the financial crisis morphed into sovereign debt crises as many countries decided to bail the banks out (the U.S. federal government injected $700 billion to purchase distressed assets). Central banks responded aggressively to the crisis. For example, the Fed quickly started to purchase assets under its quantitative easing programs and slashed interest rates, as one can see in the chart below.

The Great Recession boosted the price of gold, although it declined in the very aftermath of the Lehman Brothers' bankruptcy, probably due to the forced sales in order to raise cash. However, it quickly rebounded and ended 2008 in positive territory. And in 2009 and 2010 it really shined, outperforming many other assets. The chart below compares the historic behavior of gold and S&P 500 Index – the divergence after the beginning of the crisis is clear. 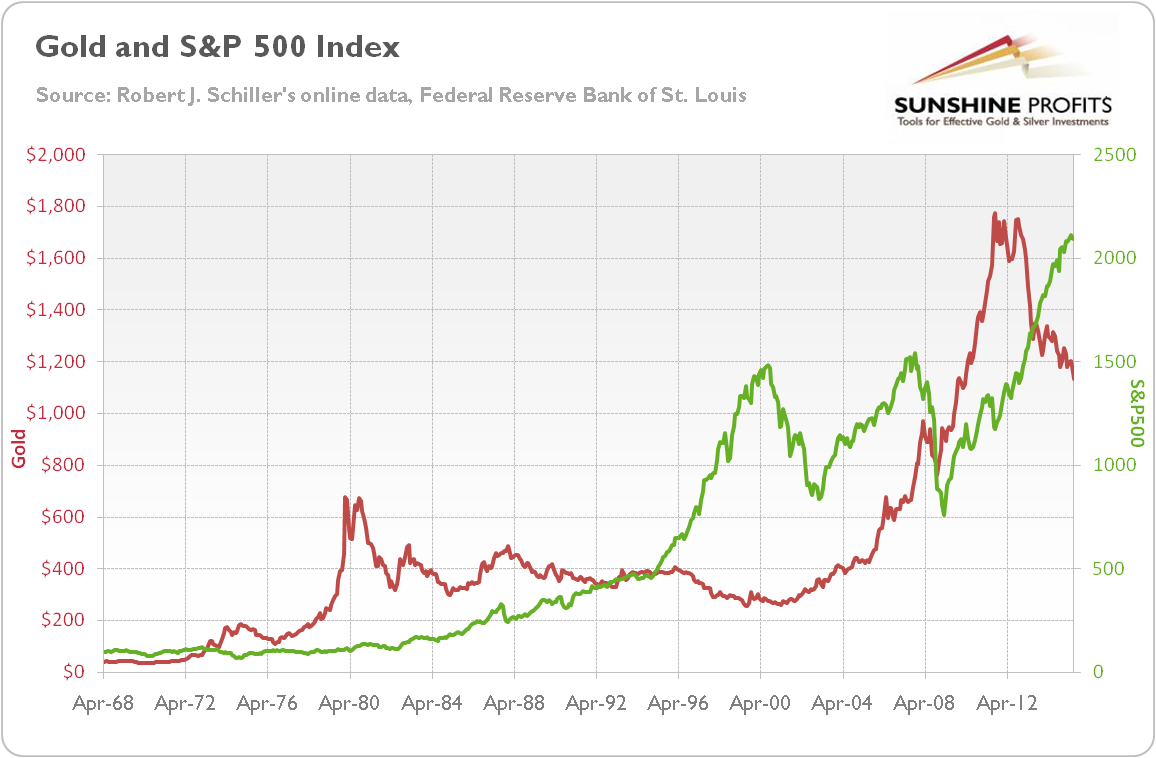 It should not be surprising as gold prices act as an indicator of the health of the economy. In times of crisis and elevated risk aversion, many investors turn to gold, the ultimate safe haven, to protect their capital. When the economy recovered, gold lost its appeal as insurance against the breakdown of the monetary system based on fiat currencies and the gold bull market ended in 2012.

We encourage you to learn more about the gold market – not only about how the Great Recession affected it, but also how to successfully use gold as an investment and how to profitably trade it. A great way to start is to sign up for our gold newsletter today. It's free and if you don't like it, you can easily unsubscribe.