Imagine there’s no government. It’s easy if you try. You may say, I am a dreamer, as John Lennon would say. However, you do not have to imagine this, as American history records several government shutdowns. Surely, it’s not a full-blown anarchy, but there’s still something to it. What’s that? In the context of the United States, the government shutdown occurs when nonessential government offices are closed due to lack of funding.

This happens when the Congress does not approve all of the spending bills that comprise the annual federal budget for the upcoming fiscal year or continuing resolutions that extend spending beyond the fiscal year end. Or, if the president fails to sign or vetoes any of the individual spending bills. Until the parties reach a compromise and those bills in question pass, the shutdown remains in effect, which means that all but essential federal agencies halt their operations (although some organizations may remain open for a while by running on cash reserves). They include NASA, IRS, Department of Commerce, Department of Education, Department of Labor, Food and Drug Administration, etc.

The government shutdown can entail important knock-on effects, especially for federal workers who can be furloughed – so, they will reduce their spending. Many services provided by the government can be reduced or postponed. National parks are closed. The release of statistical data is postponed. Sending out tax refunds is postponed. Banks lack information and cannot process loan applications. The contractors to the government suffer from the decrease in sales.

What the government shutdown implies for the gold market? Well, in theory it should support the yellow metal. After all, the shutdown increases the uncertainty on the markets, so the safe-haven assets should enjoy higher demand. Moreover, as the government spending is a component of GDP, the shutdown should negatively affect the pace of economic growth. The 2013 shutdown is estimated to have reduced GDP by 0.4 percent in the fourth quarter of 2013. And, according to the S&P Global Ratings, the shutdown costs $1.2 billion for every week the government is closed.

However, the hard data does not confirm this view. The charts below show the gold prices during the last three government shutdowns in the US. As one can see, they did not provide a boost for gold prices.

The first chart reveals that in October 2013, the price of gold rose at the beginning of the shutdown, but then it declined, only to rise again toward the end of the shutdown. Hence, we cannot say that the event was either positive or negative for the gold prices.

Similarly, in January 2018, gold prices declined between January 20th and 23rd, and went up only when the shutdown ended, as you can see in the chart below.

And what about the latest event of 2018-2019, which lasted 35 days, being the longest government shutdown in the US history? Well, although the gold prices increased in this period, we cannot say about the boost. Despite all the panic in the media, the price of the yellow metal rose only 20 dollars, as the chart below presents. The biggest shutdown turned out to be almost a non-event for the gold market. 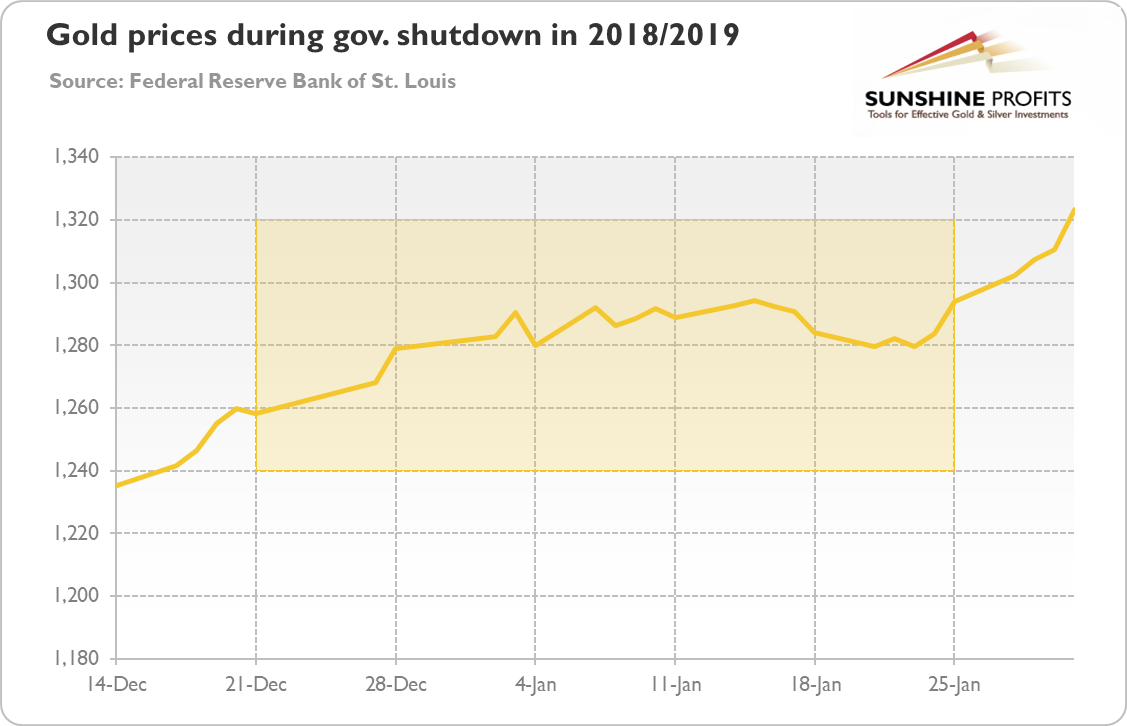 Actually, the lack of meaningless gold’s reaction is quite understandable. The government shutdown is not such a big deal, as government still provides essential services. And the shutdown will eventually be resolved. Come on, do you really think that the US economy will collapse because the Smithsonian museums, Yellowstone Park and the National Zoo are closed? Hence, unless there is protracted shutdown, a civil war or something along these lines, any potential impact of the government shutdown on gold should be limited and short-term.

We hope you enjoyed the above definition. We encourage you to learn more about the gold market – not only about the link between the government shutdown and gold, but also how to successfully use gold as an investment and how to profitably trade it. Great way to start is to sign up for our Gold & Silver Trading Alerts. If you’re not ready to subscribe yet and are not on our gold mailing list yet, we urge you to sign up. It’s free and if you don’t like it, you can easily unsubscribe. Sign up today!