An inflation hedge is an investment that maintains or increases its value over time. Hence, an inflation hedge should provide protection against the depreciation of the currency. For example, fixed rate bonds are a poor hedge against inflation. If one invest in a bond that gives a 3 percent return, but inflation rate is 5 percent, they are actually losing their purchasing power. On the other hand, most ‘hard assets’ are believed to be excellent inflation hedges. These hard assets are oil, farmland or gold.

Let’s look at data which confirms that gold preserves its value over a long time. For example, in the period from 1895 to 1999, the real price of gold increased on average by 0.3 percent per year, which means virtually no change in the real value of gold over a one-hundred year period.

On the other hand, the effectiveness of gold as a hedge against inflation seems somewhat controversial for short- and medium-term horizons (which can last decades, actually). The best example is the “medium-term” period of 1980 to 2001, when the nominal price of gold decreased by almost 70 percent. Adjusting for inflation, if investors had bought gold in September 1980 and held it until April 2001, their real wealth would have fallen by 81.6 percent (this very poor performance holds also in currencies other than the U.S. dollar). As you can see on the chart below, the real price of gold calculated as the ratio of the nominal price of gold relative to the CPI index was declining from 1980 up to 2001.

Chart 1: Gold price adjusted for inflation (calculated as the ratio of the nominal London AM Fix relative to the CPI) from 1968 to 2015.

Importantly, the most reliable relationship exists between gold and strong increases in inflation, while moderate increases in inflation or declining inflation do not materially impact the price of gold in either direction. As you can see in the chart below, gold prices were increasing in the 70s, when the inflation rate was high and accelerating, while they were decreasing in the 80s and the 90s, when the inflation rate was declining. 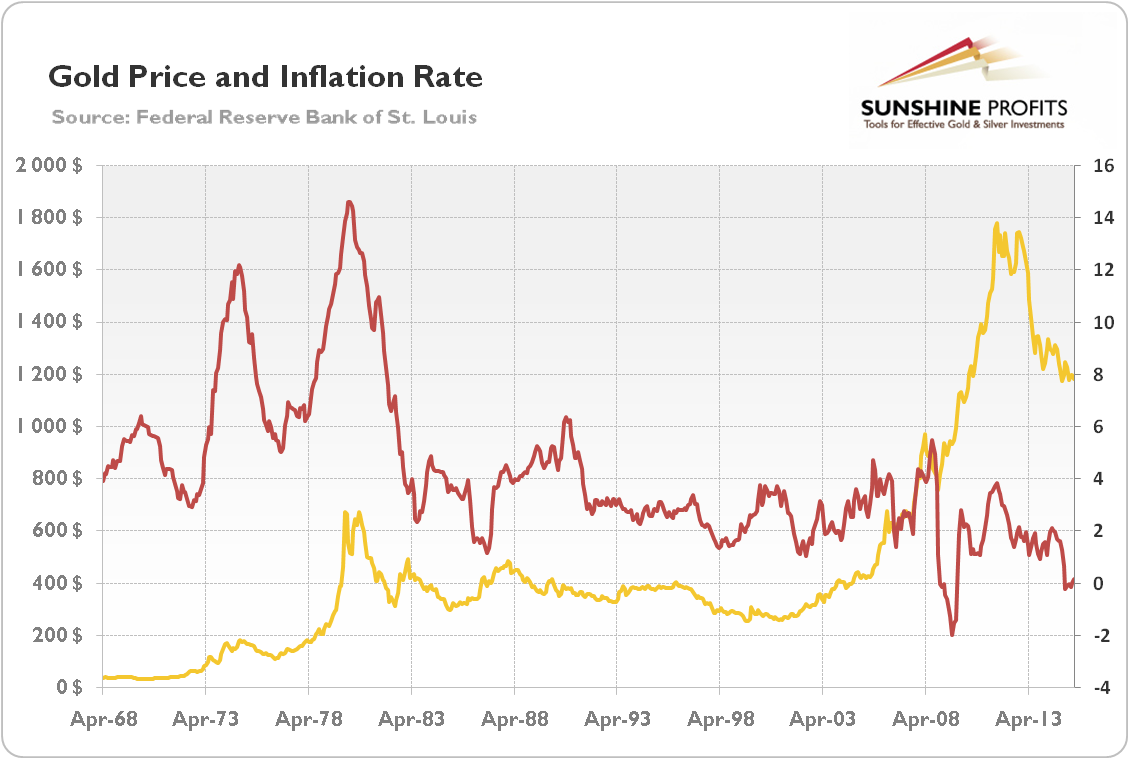 Summing up, gold is often seen as an inflation hedge. However, the data challenges this opinion, at least regarding the short run (which, however, may last longer than the name itself would suggest). That view stems almost entirely from the very fact that gold used to be money, which could not be printed, and due to the experience of the inflationary 70s, when the monetary system changed and the price of gold floated freely. However, we live now in a completely different monetary system, which essentially explains why gold is a rather poor short-term inflation hedge. Given the opportunity costs, investors should expect only significant and lasting inflation to drive the price of gold up. In other words, gold may serve as an inflation hedge only when there is relatively high inflation, usually accompanied by fears about the current state of the U.S. dollar and the global monetary system.

We encourage you to learn more about gold – not only how it is affected by inflation, but also how to successfully use the shiny metal as an investment and how to profitably trade it. A great way to start is to sign up for our gold newsletter today. It's free and if you don't like it, you can easily unsubscribe.