The Federal Reserve System, or sometimes referred to as “the Fed” is the central bank of the United States. The agency was created through the House Resolution 7883 by Rep. Carter Glass and it came into effect on December 23, 1913 after President Woodrow Wilson signed the Federal Reserve Act. The Fed is entrusted with the responsibility of ensuring that the country will have a safer, more stable, and flexible financial and monetary system.

The Federal Reserve System (commonly referred to as the Fed) was created on 1913. It was initially created to deal with financial panics but over time, its roles and responsibilities have greatly expanded. The Fed has three key objectives in determining policy; these include maintaining stable prices, maximum employment, and moderate long-term rates.

How does the Fed accomplish its mandate on an everyday basis?

The responsibilities of the Fed basically fall into four general categories:

Structure of the Federal Reserve

The Federal Reserve is designed to have a broad perspective of the overall economy and economic activities in different parts of the United States. The Fed has a central agency in Washington, D.C. – the Board of Governors, and twelve regional branches. Its regional centers are located in major cities throughout the country. All Federal Reserve Banks share the responsibility of monitoring and regulating financial activities throughout the country and for ensuring that the public receives adequate information. They also have to provide services to federal government and to depository institutions.

As the central bank, the Federal Reserve gets its authority from Congress. However, it is also considered independent because its decision doesn’t have to be ratified by the executive or legislative branch. The Fed also does not receive funding from Congress although it is subject to Congressional oversight. Its funding is mainly derived from the interest on US government securities which is generated from open market operations. Other sources of funding are derived from interest on foreign currencies, fees for services, and interest on loans to depository institutions. Earnings will be sent to the US Treasury. 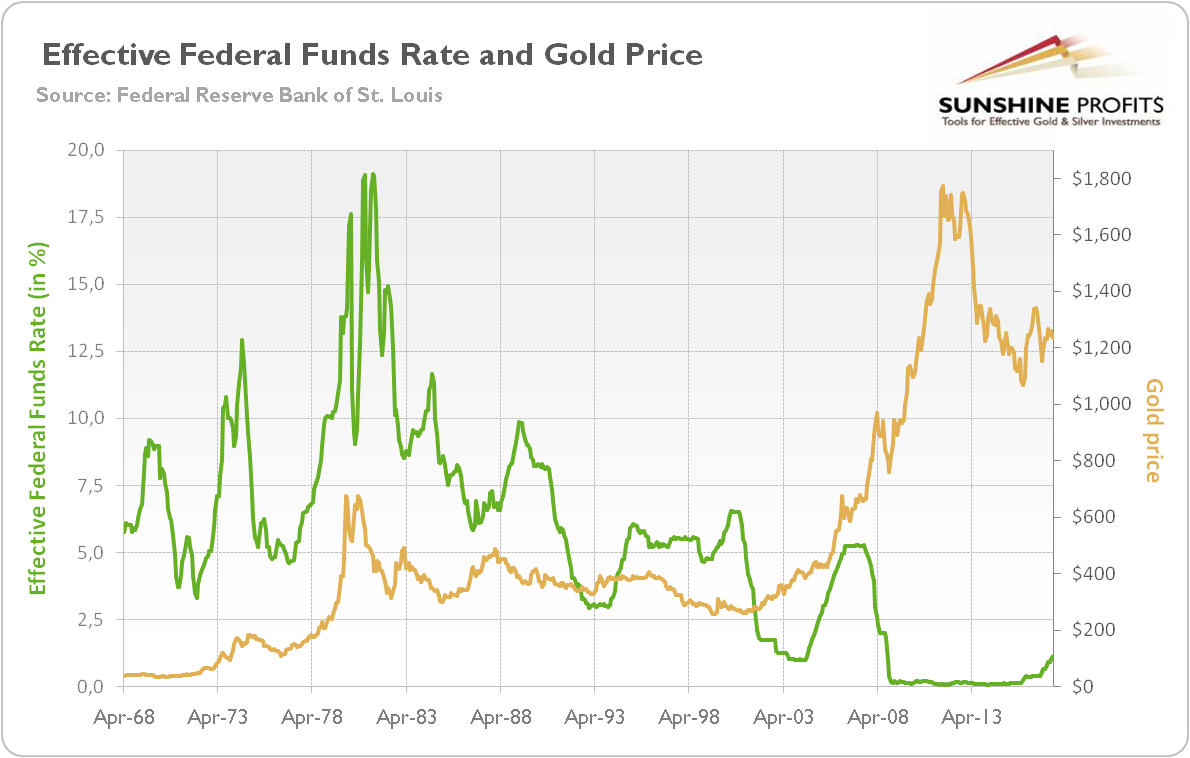 Second, gold is a safe-haven asset, a bet against the U.S. economy. Investors purchase the yellow metal when their confidence in the U.S. dollar and the Fed’s ability to control economy diminishes. On the contrary, if the Fed inspires the investors’ confidence in the economy, they increase their risk appetite and shift their funds from safe havens into more risky assets.

The best example of the Fed’s important impact on the gold market may be its quantitative easing program. Initially, after the financial crisis of 2008, quantitative easing was positive for the price of gold. It was a new and unprecedented program, which undermined the investors’ confidence and brought a fear of inflation or even hyperinflation. However, when the U.S. economy recovered after some time and there was no inflation on the horizon, the confidence in the Fed and the economy increased. Thus, the price of gold entered a bear market in September 2011, just two months after the end of the second round of quantitative easing.

We encourage you to learn more about the gold market – not only about the link between the Fed and the price of gold, but also how to successfully use gold as an investment and how to profitably trade it. A great way to start is to sign up for our gold newsletter today. It's free and if you don't like it, you can easily unsubscribe.