With Britain leaving the EU how much space was created? Exactly 1GB.

On 23 June 2016, Britons voted in a nationwide referendum to leave the European Union. This decision, called a Brexit vote, led to short financial shock with a plunging pound and equities. However, the markets soon recovered, and the shock was not as bad as many had feared. Similarly, there was a knee-jerk reaction in gold, which boosted its price up to the $1,350 level immediately after the vote’s results were announced. As the chart below shows, the gold prices spiked in the U.S. dollar, in the Euro, and in the British pound.

In March 2017, the British government formally announced the country’s withdrawal, starting the Brexit process. The drama began. There was a deadlock in the British parliament, new general elections and shifts in the UK government. Finally, Parliament ratified the withdrawal agreement, and the UK left the EU at on 31 January 2020. However, the UK remains subject to the EU law – and it has to yet negotiate its future relationship with the EU.

Brexit has been long, complex and costly process that generated a significant uncertainty and risk aversion, which supported the price of gold. And the UK exit has not fully ended yet. There are still some significant upside risks connected with Brexit for gold, such as the slowdown in the economic growth both in the EU and the UK, or the possibility that other European countries will also depart from Brussels and that the EU will split. Such concerns may spur some safe-haven bids for gold, but the consequences of Brexit for the dollar-denominated price of gold have been generally limited so far, as the chart below shows. And it is unlikely that something changes here – unless Brexit triggers broader systemic turbulences within the EU and the Eurozone.

However, it does not mean that gold does not serve as a safe-haven asset. As one can see in the chart below, the pound-denominated price of gold has gained the most due to the Brexit. Although the value of yellow metal rose more than 40 percent in both the euro and the US dollar since June 2016, it increased more than 60 percent in British pound. It means that gold was a hedge against the depreciation of the British currency. 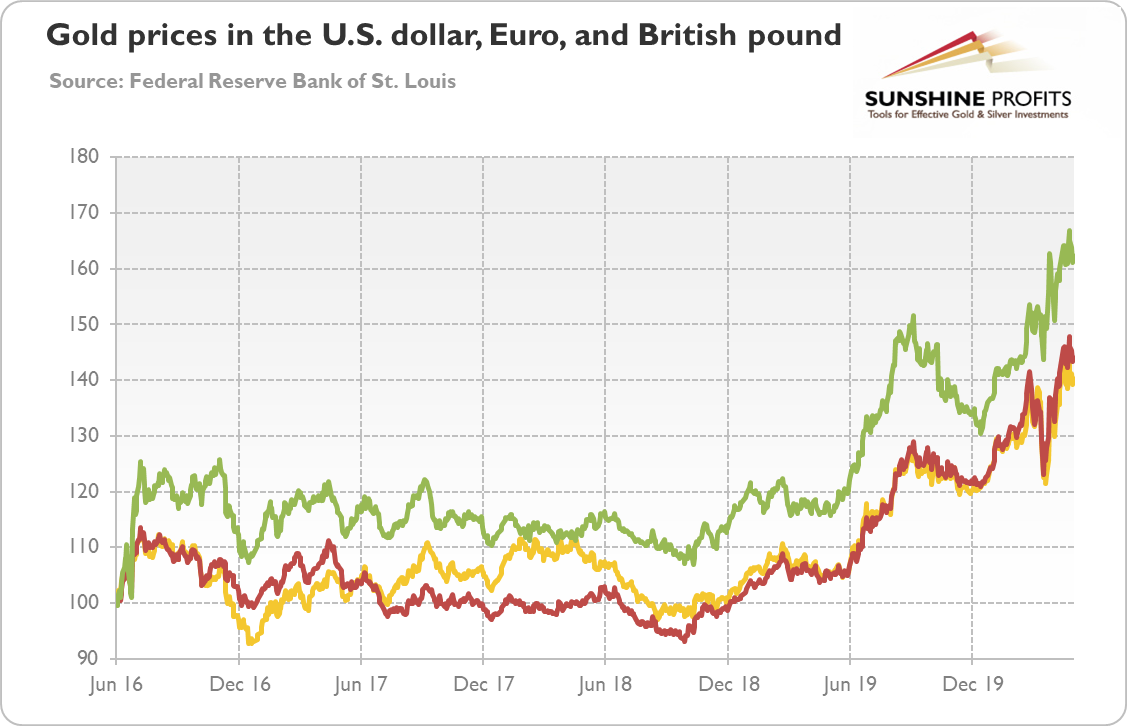 We encourage you to learn more about the gold market – not only about the relationship between Brexit and gold, but also how to successfully use gold as an investment and how to profitably trade it. Great way to start is to sign up for our gold newsletter today. It's free and if you don't like it, you can easily unsubscribe.