A cycle is a situation or process where something is regularly repeated with the passing of time. Seasons are the most straightforward examples of cycles: after spring is summer, then autumn, winter and once again spring, etc. Other cycles found in nature include days and nights.

The link between cycles and gold is two-fold. First, the business cycles affect the gold market, as the yellow metal usually struggles during economic booms, and shines during recessions. As one can see in the chart below, gold gained during most of the several last recessions (the timing of recessions is only approximately reflected by the rectangles), which confirms its role as a safe haven. 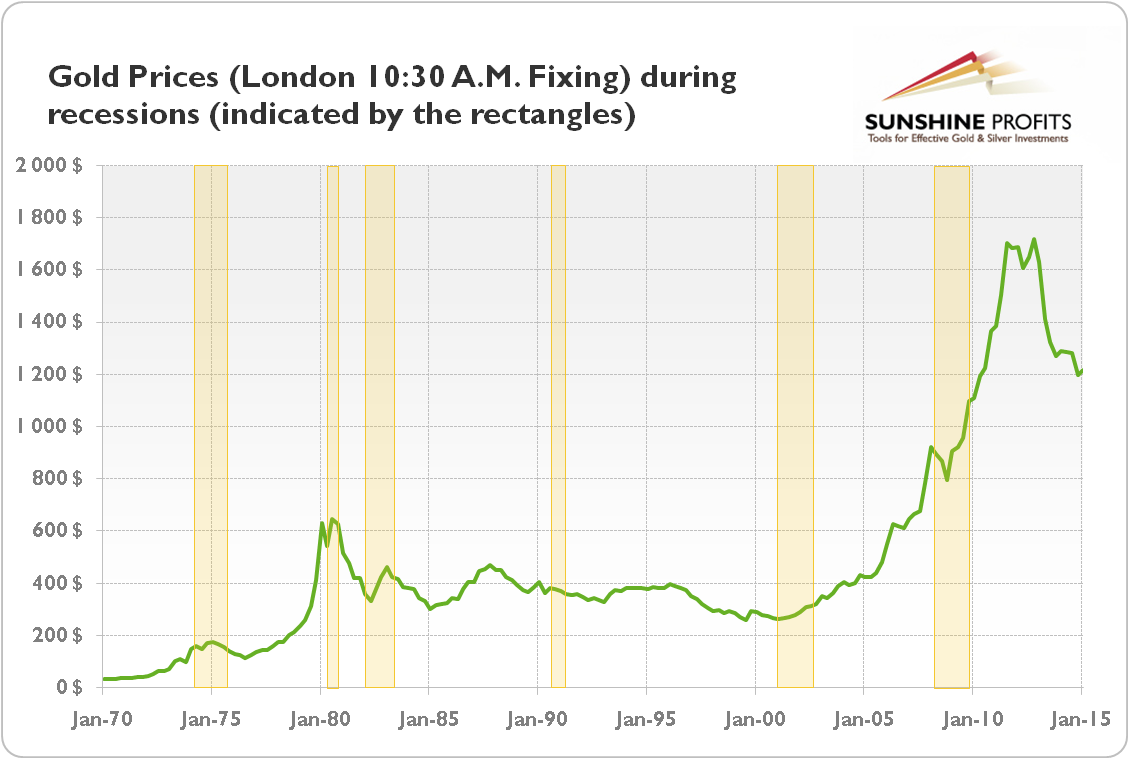 However, investors should be aware that business cycles are never the same and gold prices do not perform in the same way during different booms and busts. Gold usually perform best in contractions accompanied by uncertainty and a weak U.S. dollar, high and accelerating inflation, or low and declining real interest rates.

Second, when we look at the long-term behavior of gold prices, we notice clear cyclical patterns (although not very regular). As we see in the chart below, there were two gold bull markets and two gold bear markets.

The first bull market occurred in the 1970s due to the collapse of the Bretton Woods system and the inflationary oil crisis. In the 1980s and the 1990s, the U.S. economy flourished, while the greenback strengthened, so the yellow metal entered its first bear market. In the 2000s, the confidence in the American economy and its currency dropped, and gold reached its all-time height in 2011. Since then, due to the economic recovery after the financial crisis, gold remains in the downward trend, although the very recent years market a sideways trend in the gold market. The shiny metal has yet to decide whether it will continue its bearish trend, or it will turn upside.

The silver’s performance also depends on the business cycle. However, the link between the business activity and the silver prices are more complicated than in case of gold. This is because silver has a dual nature. On the one hand, silver is an industrial metal, so its price should rise during economic expansions, and drops during slowdowns. In other words, silver is much more widely used in the industry, so it behaves more like commodity and is more business cycle-sensitive than gold. However, like gold, silver is a monetary asset, which may be used as a hedge or safe-haven against tail risks. Indeed, there is a strong positive correlation between silver and gold, so silver often exhibits anticyclical behavior, just like gold.

We can just add that silver prices are almost two times more volatile than gold prices, therefore silver is a much riskier investment than gold. Actually, to some extent, it can be considered a more leveraged or speculative version of gold.

Cycles exist throughout our lives. This term is used in science, economics, music and even everyday life. Cycles have been analyzed for hundreds of years because people have always been curious as to why some things are identified by their repeatability. From a theoretical point of view, a cycle is a situation or process where something is regularly repeated with the passing of time. Seasons are the most straightforward examples of cycles: after spring is summer, then autumn, winter and once again spring, etc. Other cycles found in nature include days and nights.

All human activity depends on nature's cycles. In the morning people go to work and in the evening they come back home, this process constantly repeating. Paying monthly bills or regular trips to the grocery store are also examples of cyclical behaviors.

One result of human activity is the business cycle. Business cycles are up-and-down movements in economic activity, measured by various indicators. In the past, business cycles were thought to be regular with a fixed length, but today they are considered irregular and the length of their duration random.

Cycles also occur in capital markets as a fluctuation in the values of various indicators. If an investor knows the phase of a cycle he is able to gain profit and earn money. Moreover, one of the basic principles of technical analysis is that history repeats itself (if you ask us, it seems more like it rhymes). This principle is backed up by the observation that tops and bottoms occur after similar periods of time.

After this short introduction, now for some theory. Firstly, it is important to know what a typical cycle looks like. Chart 1 below illustrates a standard cycle which consists of 4 phases: Chart 1. Phases of typical cycle (for instance in gold).

The next point to be highlighted is the fact that cycles differ from each other in length of duration (Chart 2 below shows an example). Short-term cycles (red plot) are very sensitive to economic changes and last only briefly. Cycles with a very long duration from beginning to end are called long-term (yellow one). And medium-term cycles have a duration between short- and long-term. Multiple cycles can overlap and combine, leading to the formation of another cycle. Under certain conditions two short-term cycles can form a medium-term cycle, which might in turn be a part of a long-term cycle (the green plot below is a combination of the red and yellow). Chart 2. Example of cycles with different duration (for instance in silver). The yellow plot is twice as long as the red plot. The green plot is the sum of the red and yellow.

Basic cycle theory is not the only way to identify business cycles and economic trends. To be specific, cycles are a special form of so-called turning points. Turning points are recurring moments where investors buy or sell shares, independently of an index's real value. In other words, investors expect some important moments but they don’t know whether those moments will create tops or bottoms. The only information they can use is the fact that a turning point will occur. Unlike cycles, turning points don’t have to look like a sine plot where peaks and bottoms occur one at a time. Of course, in real life the combinations of peaks and bottoms can come in a variety of forms, often causing problems when trying to identify them (you'll find detail in the definition of the gold's turning points).

The problem of economic cycles was discussed in 1860 by French economist Clement Juglar, who identified cycles lasting from 8 to 11 years. Then, in the 20th century Simon Kuznetz and Nikolai Kondratiev published studies identifying cycles lasting 15 to 25 and 45 to 60 years. These cycles are the most popular in theory, but they last a very long time so they are not very useful for traders to gain profits. In practice, analysts have to detect cycles on their own.

To sum up, cycle theory is one of the most important theories investors should consider. Knowing the phase of a cycle may help investors make appropriate decisions and increase profits. Every investor wants to know how long a bull or bear market will last, and they use many special tools to detect cycles. The cycles in gold and silver are quite specific as both precious metals depend on variety of factors, as we explained earlier.

We encourage you to learn more about the shiny metal – not only about its cycles, but also how to successfully use gold as an investment and how to profitably trade it. Great way to start is to sign up for our gold newsletter today. It's free and if you don't like it, you can easily unsubscribe.