The CoT report enables investors to peek behind the scenes of the gold futures market and to better understand the psychology of the marketplace and, thus, get a better idea of futures moves on the gold market. This is because the COT report shows the net long or short positions of different types of traders.

The Commitments of Traders Report, also known as CoT or COT report, is one of the most important publications on the U.S. futures market, including gold futures. It is usually published every Friday at 15:30 Eastern Time by the Commodity Futures Trading Commission (CFTC) to provide market participants a breakdown of open interest positions (i.e., the total number of futures contracts not yet liquidated by an offsetting transaction or fulfilled by delivery) of all major contracts that have more than 20 traders. Unfortunately, there is a three day lag between a report and the actual positioning of traders, because though the report is issued on Friday, it contains Tuesday’s data.

Although the CoT report is released with a small delay, it is still a great tool for traders, since it allows investors to see what large Comex gold traders are doing. It gives important data on trading positioning that drive trends in the gold market – this is why data from the CoT reports can be used as a sentiment indicator in the gold market. The changes in positions of commercials and non-commercials are the most closely watched. The latter usually follow the trend in gold prices, while the commercial activity often behaves in the opposite direction of the market trends, as the chart below shows. 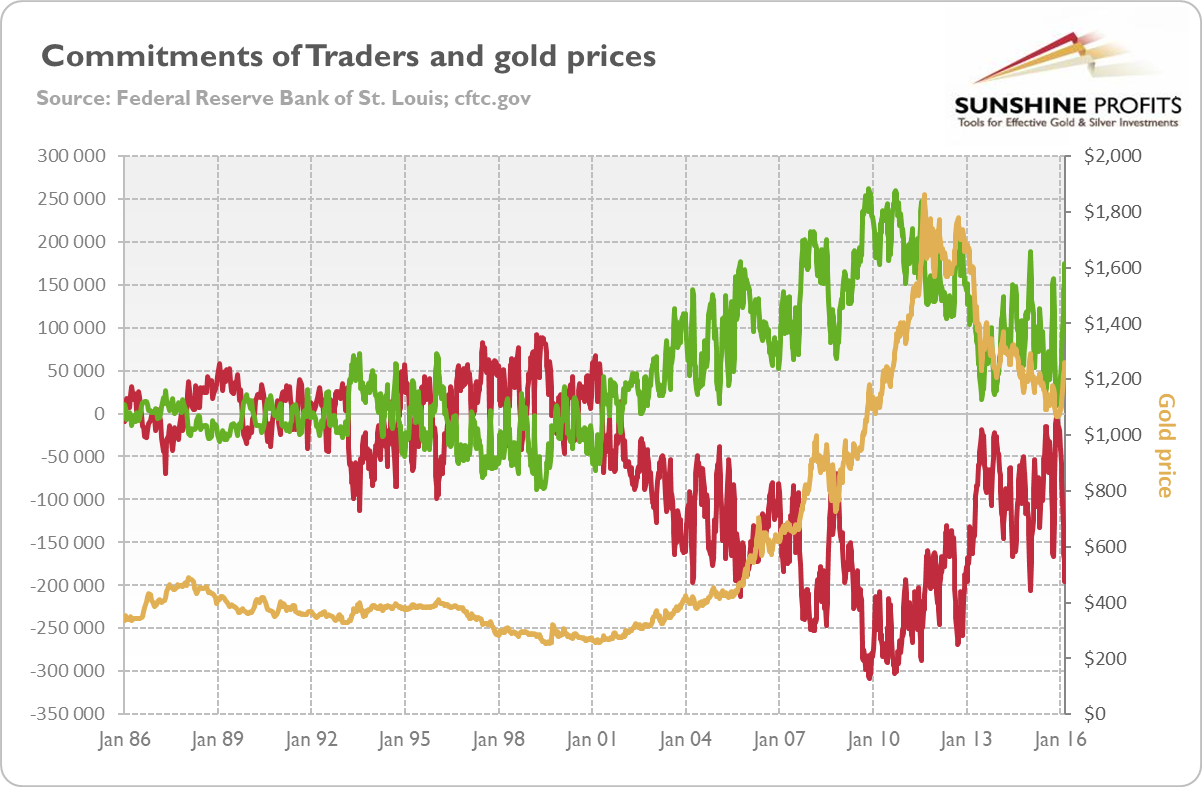 The non-commercials are trend-followers. They increase their net long position when prices rise and scale it back when prices decrease. For example, when a 2000s bull market continued, non-commercials were adding more net long trades. Consequently, close to the end of that rally, they had their most bullish positions. In other words, non-commercials are generally on the right side of the market, but they tend to become overextended near peaks and bottoms.

Now it should be clear how the CoT report can be used for trading purposes. Investors can, for example, monitor speculators (commercials), as they tend to be most bullish (bearish) just prior to significant price tops and most bearish (bullish) before the significant price bottoms. This is why data from the CoT reports can be used as a sentiment indicator in the gold market. However, investors should remember that the CoT report is not a timing indicator, as there are no absolute benchmarks of bullishness or bearishness which could trigger investment decisions.

We encourage you to learn more about the precious metals market – not only what is the link between the CoT report and gold, but also how to successfully use gold as an investment and how to profitably trade it. Great way to start is to sign up for our Gold & Silver Trading Alerts. If you’re not ready to subscribe yet and are not on our gold mailing list yet, we urge you to sign up. It’s free and if you don’t like it, you can easily unsubscribe. Sign up today!